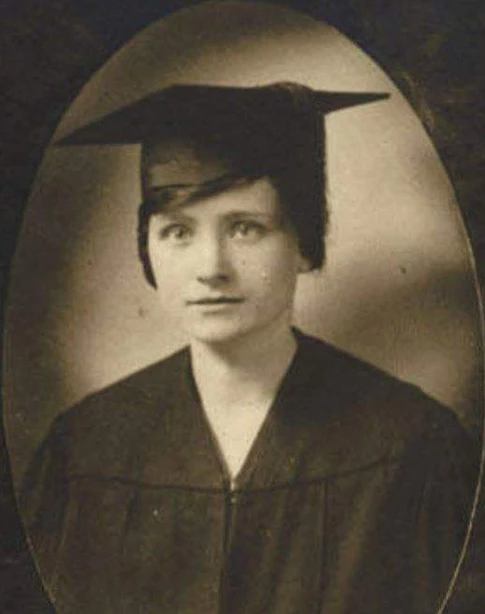 For National Women’s Month, we are welcoming a guest author to the Waring Blog. Rachael Gaskin is a candidate for a master’s degree in History from the University of North Carolina Charlotte. Primarily her concentration is in Public History. She is currently working on her thesis which focuses on her great grandmother, a graduate of MUSC.  Rachael visited the Waring Historical Library as part of her research for her thesis. When not researching or writing, Rachael enjoys spending time outside, reading science fiction novels, and having movie nights with her friends.

When you think about Women’s History Month, you probably don’t initially think of women entering medical school programs in the South. Women at the forefront of that movement had to face many challenges, and one of those women was my great grandmother, Dr. Madge Baker Gaskin. Madge Baker Gaskin enrolled at the Medical College of South Carolina at Charleston in 1921. Just three years after the beginning of the Spanish Flu and the end of World War One and one year after the ratification of the nineteenth amendment giving women the right to vote. Amid political, social and medical change, a young woman from Columbia, South Carolina began her medical school journey in Charleston.

Madge’s parents always made education a priority for their six children. They knew that education was what would give their children the ability to chase after their own dreams. So, when Madge met a “lady physician” during the Spanish Flu epidemic while she was at Winthrop College, now known as Winthrop University, it was a life changing experience for her. She wrote in her journal that, “I met the first lady physician I had ever seen – beautiful white hair and she had been a missionary to China”.1 From that moment on, Madge’s dream was to become a doctor.

After experiencing difficulties with getting her course credits to transfer and having to take a condensed higher-level chemistry course over the summer, Madge began her classes at the Medical College of the State of South Carolina at Charleston in 1921.2 Her experience did involve difficulties and discrimination. Her male classmates would bother her in classes by putting frogs down her dresses, looking up her skirt while she walked down the stairs, and pulling the pins out of her hair during lectures. Professors would put her on the spot in classes and make her prove herself more than the men, but Madge persisted and continued in her studies. In 1925 though, a few days before her scheduled graduation, she found out that she wouldn’t be graduating. She wrote in her journal about her frustration, “That Saturday night when the graduating class of 1925 names were posted on the bulletin board in the main hall of the Medical College at Charleston, SC – all 42 of us, me being the only girl left in my class at the time, were so excited, craning our necks to see our names written there. Everybody seemed upset, and then I learned that 4 of us did not pass.”3 Madge speculated in her writings that she failed simply because she was a woman by saying, “then I learned that 4 of us did not pass. I really had not thought of the possibility of not passing my work. The only thing I found out was that all of us failed gynecology.” 4  Not only was she shocked to find out that she had failed the class when she had expected to make an ‘A’ in the course, which she later discusses in her journal, but the irony of it being her gynecology exam was not lost on her either. At this point, Madge was the only woman left in her program.

In 1926 though, Madge came back and completed her schooling. She graduated. But even though she had completed medical school, she still had difficulties finding a medical residency placement. She wrote about it saying, “All of the boys were able to get student internships in Charleston, but there was no place for a girl.” After looking all over, she finally found a position in Iowa at the Cherokee State Hospital, a psychiatric hospital in Cherokee, Iowa. She moved to Iowa, completed her medical residency and married her medical college sweetheart, Dr. John Gaskin in Washington D.C. before returning to South Carolina with him. They lived in Mt. Croghan for three years and then, with the hope of being able to make more money to help support their growing family, decided to move to Albemarle, North Carolina in 1930. They, together, opened a private medical practice in the small town of Albemarle. Madge continued to practice medicine for the remainder of her life and was the only female physician in her small town for thirty years. She served and loved her community her entire life.

As a part of women’s history month, it is important that we remember the women who are not always remembered for their contributions to their fields of study, their communities, and their families. All women deserve to be recognized for the parts that they played in the lives of those around them and the impact that they made – and I am honored that I get to help to preserve the memory of my great grandmother.

Enter your e-mail address to receive notifications of new posts by e-mail.